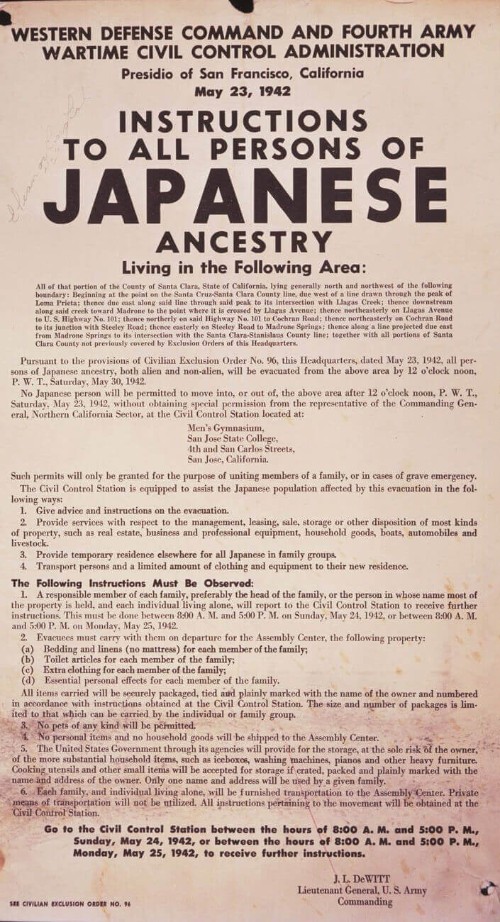 The attack on Pearl Harbor on December 7, 1941 marked the beginning of the United States’ involvement in World War II. It also marked the acceleration of anti-Japanese sentiment in America, and with it an unfounded fear of “enemy aliens” that would lead to the internment of some 120,000 Japanese Americans —two thirds of whom were US citizens—for the duration of the war.

On February 19, 1942, President Franklin D. Roosevelt signed Executive Order 9066, which allowed for the designation of “military areas” from which any citizen or non-citizen could be excluded. On March 2, Military Area No. 1 was established, including the western portions of Washington, Oregon, Arizona, and the entirety of California.

A series of proclamations limited the ability of Japanese Americans in these areas to move freely, imposed mandatory curfews that only applied to people of Japanese heritage, and allowed for the freezing of “alien assets,” creating financial difficulties for many Japanese American families.

The first Civilian Exclusion Order was posted on March 24, 1942, and called for the removal of Japanese Americans on Bainbridge Island in Washington. In less than two months, all Japanese Americans living in Area No. 1—the entire west coast—had been ordered to report to Civilian Assembly Centers. With next to no time to prepare, those affected were forced to watch as the lives they’d built for themselves were disassembled. Allowed to take only what they could carry, they sold their homes, businesses, and belongings for a fraction of their worth as they rushed to comply with the orders.

Those being excluded went first to Civilian Assembly Centers, temporary camps set up along the West Coast. Assembly Centers were often located at horse tracks and fairgrounds, which were turned into makeshift barracks. From the Assembly Centers, they were transported further inland to one of ten camps spread out across California, Arizona, Idaho, Colorado, Arkansas, Utah, and Wyoming. These camps were euphemistically called Relocation Centers, though Roosevelt himself referred to them at times as concentration camps.

At the Relocation Centers, living quarters were cramped, often eight people to a room, with communal showers, toilets, mess halls, and laundry facilities. Surrounded by barbed wire and armed guards, internees made the best with the little they were provided. The community came together to form sports teams, choirs, and other groups; they served one another as doctors, teachers, firefighters, and police officers. In 1944, the draft was reinstated for Japanese Americans, and 26,000 men left the camps and went to war for a county that was treating them and their families as an enemy. 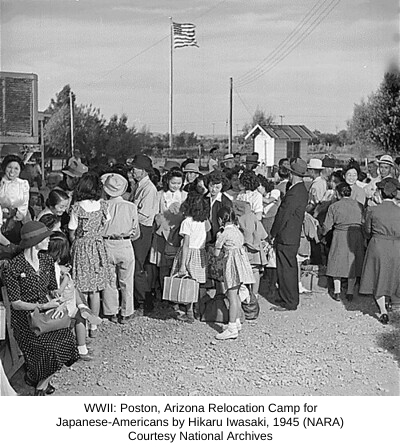 On January 2, 1945, the exclusion order was lifted. After two and a half years of imprisonment, internees were given $25 and a train ticket home. Following their release, many of those who endured internment avoided speaking about it, understandably preferring to leave the experience in the past. It would be decades before the government would acknowledge any wrongdoing.

It is hard to accept that such an injustice was carried out in our own country. Not only in our country—in our own Peninsula community. Tanforan racetrack in San Bruno, now the site of a shopping mall, served as the Assembly Center for the Bay Area. In 1942, thousands of Japanese Americans were processed there before being sent away for the duration of the war. There is a historical marker noting the site’s significance, though it is doubtful many of today’s shoppers stop to ponder just what happened there all those years ago.

One Bay Area museum, though, gives visitors an important window into the reality of internment. The Japanese American Museum of San Jose includes, among other exhibits, an accurate recreation of the living quarters at California’s Tule Lake Relocation Center. Art, artifacts, and first person accounts make clear the enormity of what happened to the Japanese American community during and after the war.

While most World War II narratives paint America as the hero, it is important to remember the injustices suffered by our own people on our own soil. Where there are gaps in our history books, our art can brightly illuminate a story that must not be forgotten.