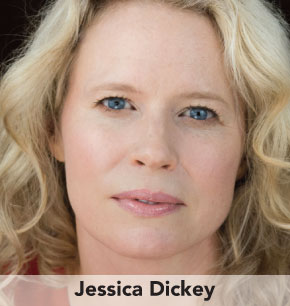 JESSICA DICKIE is a Brooklyn-based, award-winning playwright. Her most recent play, The Convent, a dark comedy about a group of women who try to live like nuns in the middle ages, premiered Off-Broadway this year in a co-production by Rattlestick and Rising Phoenix and WeatherVane. Other plays include The Rembrandt, about a museum guard who decides to deliberately touch a Rembrandt painting, which had a sold-out run at Steppenwolf starring John Mahoney. Her three other plays have been produced Off-Broadway in New York and around the country: The Amish Project, about the 2006 Nickel Mines school shooting in an Amish community; Charles Ives Take Me Home, about a violinist father and his basketball star daughter; and Row After Row, a dark comedy about Civil War re-enactors. In television, Jessie is developing a show for Paramount TV and Tom McCarthy’s company, Slow Pony. She is a member of the exclusive New Dramatists and a recipient of the prestigious Stavis Award. The New York Times hailed Jessie’s writing as having “freshness, economy, cheeky vulgarity, with a fine measure of poetic insight”, and the New Yorker described her writing as “funny, smart, deep and sad”.  www.jessicadickey.com

GIOVANNA SARDELLI (Director of New Works) recently directed Rajiv Joseph’s Archduke (NWF 2016) for TW, she directed the World Premiere at the Mark Taper Forum and the Region Premiere of They Promised Her the Moon (NWF 2018) for The Old Globe which will be seen at TW this season. She has directed numerous plays by Rajiv Joseph including the Obie Award Winning Describe the Night (NWF 2014). She’ll be directing the World Premieres of Heidi Armbruster’s Mrs. Christie for Dorset Theatre Festival this August and Catya McMullen’s Georgia Merching is Dead for Ensemble Studio Theatre in the Fall.