Map the Action and See the Song

In Mark Twain's River of Song, we are introduced to famed American author Mark Twain as he reminisces about his childhood in Hannibal, Missouri, right along the banks of the Mississippi River.

Aboard a steam boat headed down river, Twain encountered farmers, lumberjacks, gamblers, and slaves running for freedom. Twain's career as a riverboat pilot was cut short by the Civil War. Instead he became a writer, basing his characters on the people he’d met along the Mississippi.

Find the corresponding letter on the map to see where in Mark Twain's journey a song comes in. Click the song title to see the lyrics. 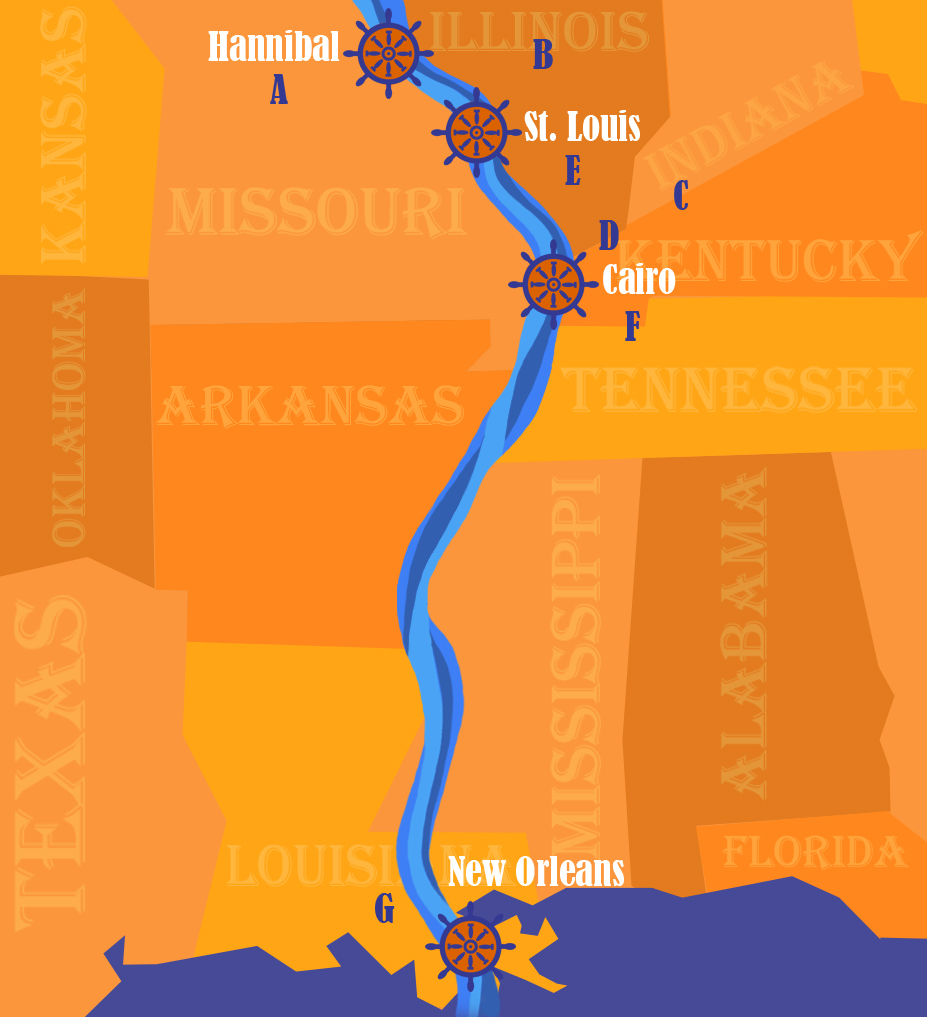 A. "Don't She Roll"
Hannibal, Missouri, hometown of Mark Twain
and later, the start of Huck and Jim’s journey

Like many of the people who traveled down the
Mississippi river, this song sings it's many praises.

B. "One Thin Dime"
Farmlands, where they “work all day in
the hot Illinois sun”

"One Thin Dime" tells the story of farmers
along the Mississippi who have to work hard
to make their meager pay count.

C. "Mark Twain"
One of the characters was a slave in Kentucky
before fleeing northeast on the Ohio River

Gauging the depth of the water was a practice
on boats like the one Valisia rode to freedom.
"Mark Twain" was used as shorthand for a depth
of two fathoms, which was considered safe for travel.

D. "Rovin' Gambler"
Cave-In-Rock, Illinois, a hotbed of gambling
along the Ohio

Rivers were a reliable source of travel for
gamblers looking to strike it big due to being
lined with ports and towns.

E. "Follow the Drinking Gourd"
St. Louis, Missouri; Huck and Jim are impressed
by the city lights as they float

"Follow the Drinking Gourd" played an important
role in the Underground Railroad. It is believed
the lyrics were used by an operative to encode
escape instructions and maps.

F. "Up 'Round the Bend"
Cairo, Ohio, where the Mississippi River
meets the Ohio River. Jim plans to float
downriver until he reaches Cairo, then
travel north to the free states

The lyrics of "Up 'Round the Bend" bring to
the forefront that desire for freedom and his
trust in the river to get him there.

G. "Dreamin' of the Delta"
The Mississippi Delta, where the river
meets the Gulf of Mexico.

Here the play is concluded to "Dreamin' of
the Delta" along with the journeys of those
who travel the Mississippi's waters.

From the iron-red water, up in Minnesota
To the muddy-brown delta on her southern border
Dams an' Levies, they've tried t' hold her
She can shake off a town with a shrug of a shoulder

You can hang on to her
But you can't control her
'Cause she rolls
Don't she roll
Don't she roll so wide an' long
Muddy water, keep rollin' on

Ridden on her with rafts an' steamers
Carryin' the hustlers, the fools, an' dreamers
She can grow good cotton
She can grow good rice
Sooner or later gotta pay the price
She takes her time, and then takes your life

One day I know, you're gonna carry me home
Rollin' nice and easy
She can turn on a dime
Change direction like you change your mind
Swollen in anger, she'll go from bad to worse
Make a poor man cry, make a preacher man curse
She drank up the Missouri just to quench her thirst

Growin’ corn by the Mississippi River
Work all day in the Illinois sun
Harvest time take my crop to town
Grab my hat and try to have a little fun.
Work all year, just to earn one thin dime

Harvest moon over St Louie
Spend my money on the ladies I meet
Music playing ‘round every corner
Take a little walk down Water Street
Came to town, just to spend one thin dime
(Musical turnaround.)
Come the mornin’ I spent all my money
Lord have mercy! What a mighty fine time

The work is hard, but...the land is good.
You become a part of it...an’ it becomes a part of you

'Cause then and there, year after year
It was getting pretty monotonous
Until in the 18 hundreds a little man
Came along and revolutionized the
Whole gauging industry
Instead of saying marking on the twine
He cut it short and said Mark twain

“UP ‘ROUND THE BEND”

Workin’ the cotton, workin’ the corn
From “cain’t see t’ cain’t see” each day
I’ve been workin’ since the day i was born
Workin’ my whole life away

Hear that whistle, they’re ringin’ the bell
Steamboat headin’ up river
Big wheel turnin’, pushin’ her on
Won’t you carry away this poor sinner

‘Cause there is a land where my Joy is waitin’
Waitin’ to shout an’ t’ sing
Up ‘round the bend where m' sorrow will end
Freedom’s a powerful thing.

“DREAMIN’ OF THE DELTA”

Moon shines on the water a thousand twinklin’ lights
The river singin’ low as the stars puts on a show
Woh Oh, I’m dreamin’ of the Delta tonight
Nightingale is singin’
Sweet Southern melodies
Spanish moss like Spanish lace
In the Live Oak trees

Memories are tyin’ me to my Heart’s delight
Where once I roamed in my Mississippi home
Woh Oh, dreamin’ of the Delta tonight
One of these days I’m gonna follow that steamboat on down

Old Man River carry me back
To my muddy, Mississippi water town
My weary heart is waitin’ till the day I can return
Longin’ for my homeland, how my heart does yearn
For a summer evenin’ when the world is still an’ quiet the River’s singin’ low, a tune my heart would know